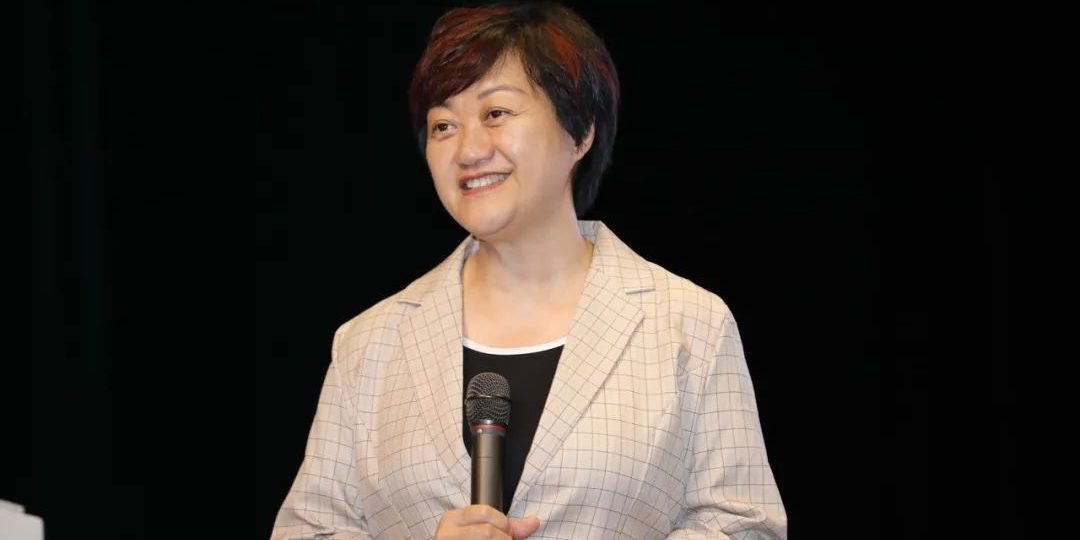 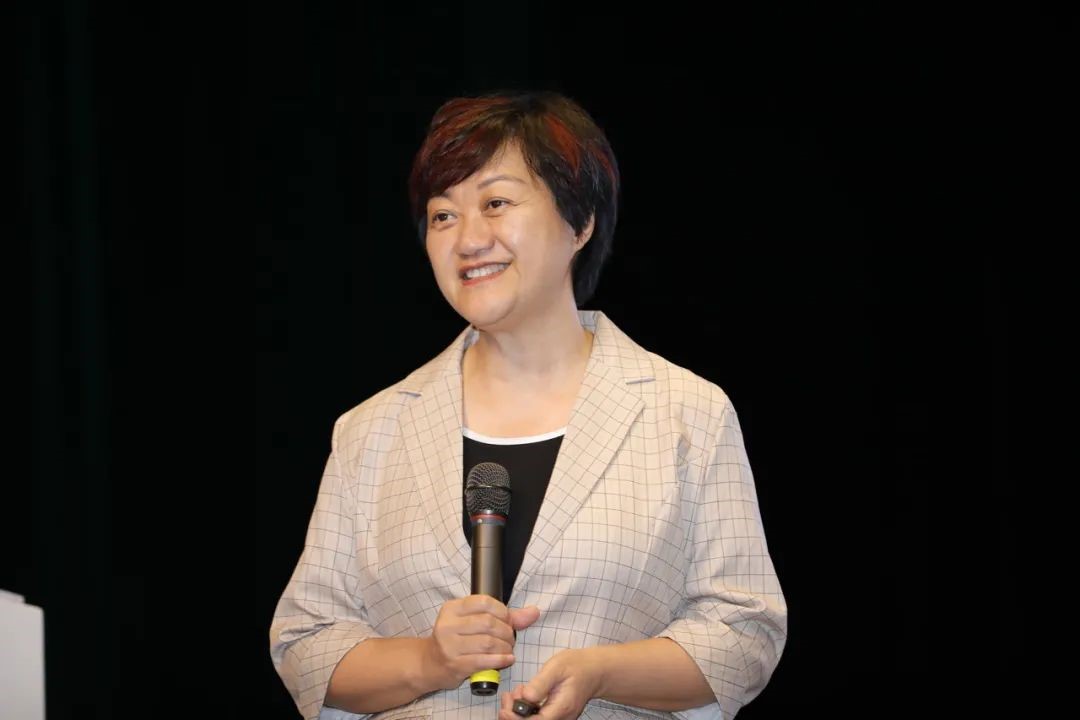 In the AIoT era, RISC-V meets the core needs of the development of the AIoT industry.  In the context of multi-scenario and fragmented applications, RISC-V is expected to become the most mainstream instruction architecture for processor chip applications in the future.

Recently, a reporter interviewed Dr. Aglaia Kong, the founder of LeapFive Technology.  She pointed out that since its establishment, Yuefang Technology has been based on research and development, focusing on using the 64-bit RISC-V CPU architecture to make high-end industrial IoT chips.  The LeapFive’s NB2, the world’s highest 12nm process high-performance chip, will be mass-produced at the end of this year and will undertake mass production next year, which will lay a solid foundation for the system application of RISC-V technology in important industry scenarios.

According to public information, Guangdong LeapFive Technology is a chip technology company founded in 2020 by Dr. Aglaia Kong, the former CTO of Google. The company focuses on the research and development of SoC chip products based on RISC-V open-source instruction architecture.  The goal is to use SoC chip products as the basis to demarcate the application directions of industrial IoT such as smart cities, smart energy, smart logistics, and smart manufacturing to promote the implementation of RISC-V technology, and empowering China’s digital economy.

“If we want to improve the Industrial IoT, we need to solve the following problems.” Dr. Aglaia Kong said, “The first is our industrial automation chips must be independently controllable, because if we can’t get the chips in time or they do not sell them to us, all industrial automation will stop; the second is the issue of information security, we must be safe and secure from the design of the chip to the tracking of information to prevent others from malicious attacks; the last point is the level of intelligence. In fact, the current level of automation and intelligence of the Industrial Internet is still very low, and many are limited to the networking level, and in many complex scenarios, chips with higher general computing power and computing power in specific fields are needed to support data processing.”

Therefore, to solve the problems mentioned above, we have made three series of SoC products: BF, GF and NB.  Among them, BF series is a wireless connection chip for our low-end positioning. It adopts a 40nm process, an MCU with a computing power of about 180 MHz, and functions in Wi-Fi and Bluetooth.  This chip has been mass-produced last year.  Its advantages are low cost and low power consumption.  It is mainly used in scenarios with low computing power requirements such as smart meters and energy storage batteries in the industrial Internet.

On the high-end side, LeapFive Technology’s highly integrated edge intelligent application processor NB2 based on the RISC-V architecture has been released this year.  According to Dr. Aglaia Kong, the NB2 chip is a highly integrated SoC chip for industrial applications.  This SoC adopts the RV64 instruction 4-core CPU architecture for general computing power, and the computing power of each core can run to 1.8~3.0 GHz, while in terms of computing power in specific fields, AI, GPU, visual, auditory DSP and many IoT interface functions are added. Therefore, NB2 can be used in scenarios that require powerful AI and edge computing, such as edge terminals, smart gateways, and other fields.

“NB2 uses a 12nm process technology, which is regarded as the world’s most advanced high-performance chip for industrial IoT applications.  This is very rare in the industry, and it is basically the first in the world.  After we succeeded in tape-out last year, we are currently doing the final functional test and related performance and stability tests of industrial standards.  It is expected that mass production will begin in the second half of this year, and mass production will be accepted next year.” Dr, Aglais Kong emphasized.

In addition, in the field of industrial IoT, there are many automated scenarios that require chip with certain amount of computing power, but do not require excessive computing power; therefore, LeapFIve Technology has developed the GF series of SoCs on the micro-edge side.  The GF series chips are about 40-22nm technology, with certain lightweight AI functions and computing power below 1GHz. It is expected that the chips will be tape-out this year.

It is understood that LeapFive Technology can choose to use the above three types of chips according to different application scenarios.  In addition, the company has a self-created platform called “ABC”, which mainly through blockchain technology, thus realizing the sale and reliable upload and traceability of data.

“For us at LeapFive Technology, it is three chip series plus a platform. Because we are doing is a brand-new instruction architecture based on RISC-V; therefore, we only have a chip without software and an operating system, if we do that the chip can’t use by industries.  Then around the chip, we will provide the services of this operating system and tool chain.  In this way, it is easier for users to migrate from ARM or x86.” Dr. Aglaia Kong analyzed.

Since the RISC-V instruction is open-source, free, modular, and streamlined, the industry has been building an ecosystem around it since its inception in 2010.  In recent years, with the rapid development of AIoT and the continuous promotion of domestic industry-university-research institutions, the RISC-V ecosystem has ushered in rapid development.

From the perspective of market development, according to incomplete statistics, the global RISC-V instruction market size is about 220 million US dollars in 2020 and will reach 380 million US dollars in 2021.  It is expected to exceed 1 billion US dollars by 2024.  From the perspective of shipments, according to Semico Research Group data, it is expected to have more than 62.4 billion processor cores using the RISC-V architecture by 2025, with a compound annual growth rate of 146% from 2018 to 2025.

According to Dr. Aglaia Kong, “The adoption of RISC-V will bring business freedom, technical freedom and innovation freedom to enterprises.  With the continuous expansion of application fields and functions, the instruction of RISC-V will continue to expand.  Its modular approach makes chip functions diversified, design and development full of flexibility, and the development process becomes fast and efficient.  The future development trend of RISC-V will be from general-purpose processors, applications in specific fields, system and chip integration, to high-end fields such as data centers make it a vertical ecosystem from the underlying processor architecture to the top-level systems and products.”

From a domestic point of view, in recent years, technology companies including Alibaba Pingtouge, Xiaomi Huami Technology, Huawei HiSilicon and other technology companies have developed several chips or IP products based on the RISC-V instruction set, and many products have achieved large-scale production.  For example, Alibaba Pingtouge has previously released a series of products such as Xuantie C906 and 910, which cooperative companies include Allwinner Technology, Zhuosheng Microelectronics, Zhongke Lanxun, etc.  Huami Technology has released a series of products such as Huangshan No. 1 and Huangshan 2S, which applied to Xiaomi’s smart wearable devices. Huawei HiSilicon released the Hi373V110 product, which is mainly used in Huawei and Honor brands. In addition, there are Zhaoyi Innovation, Huiding Technology, Xinlai Technology, Espressif Systems, Qinheng Microelectronics, Zhongke Lanxun etc. many domestic manufacturers have also successively released a series of chip products based on the RISC-V instruction.

Dr. Aglais Kong said that at present, most domestic companies use 32-bit RISC-V to make MCUs, but LeapFive Technology is not focused to make low-end MCUs, but we focus on the use of 64-bit RISC-V CPU architecture, to make relatively high-end industrial IoT chips.  Basically, there is not much competition in this field. From the perspective of China as a whole, there are basically only 3-4 companies doing that.

“When you make a 64-bit RISC-V chip, of course you want to run some high-end applications, but the operating systems of these high-end applications are different from 32-bit SoCs and require more and more complex software support to run, which is why there are still not so many companies doing RISC-V 64-bit.  To solve this problem, we have a team of more than 60 people in India, dedicated to the research and development of this operating system, which we spent a lot of time and energy on one thing I have been doing all the time.” Dr. Aglaia Kong explained.

Based on R&D, it has an operating system R&D team of more than 60 people in India 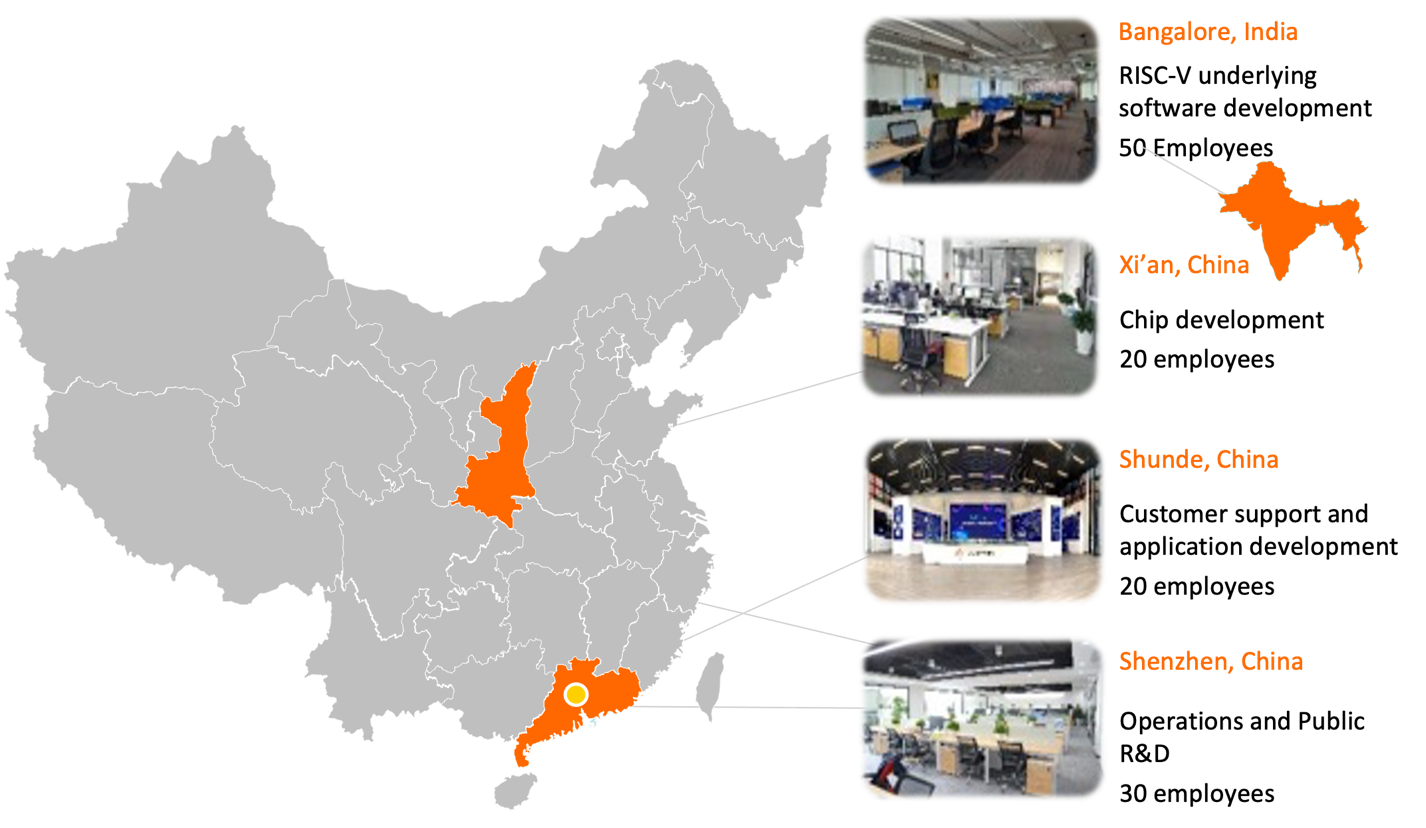 The locations of the R&D teams of LeapFive Technology (Ref. LeapFive)

The management and R&D team of LeapFive Technology are mainly from well-known domestic and foreign technology companies such as Intel, Google, Samsung, SMIC, DJI, Fiberhome, Huawei, and ZTE.  At present, the company has a team size of about 130 people, plus the total number of R&D teams of upstream and downstream ecological cooperation companies exceeds 200, of which 10% are doctors and 80% are masters, with strong technical strength.

“LeapFive is basically following talents now, because you know that there are not many chip talents in the world, so the competition for talents is also very fierce.” Dr. Aglaia Kong said, “Our R&D team located in four places: Shunde, Shenzhen, Xi’an, and India, Shunde is our headquarters.  When the company was first established, we were looking for a place that could provide application scenarios, where chips could be used immediately after production.  After our investigation, we found that there are many companies in Shunde are engaged in the R&D and production of home appliances and industrial products, which requires many chips every year, so we think this is a good place to start.”

In addition, since operating system talents are very difficult to find in China, we currently have a team of more than 60 people in India, specializing in operating system.  Then, we have a team in Xi’an specializing in chip design.  Many of these engineers are from world-renowned companies such as Intel, Huawei, ZTE, and Fiberhome.  They have an average of more than 10 years of working experience, so I am relatively lucky. Such good talent can be found. 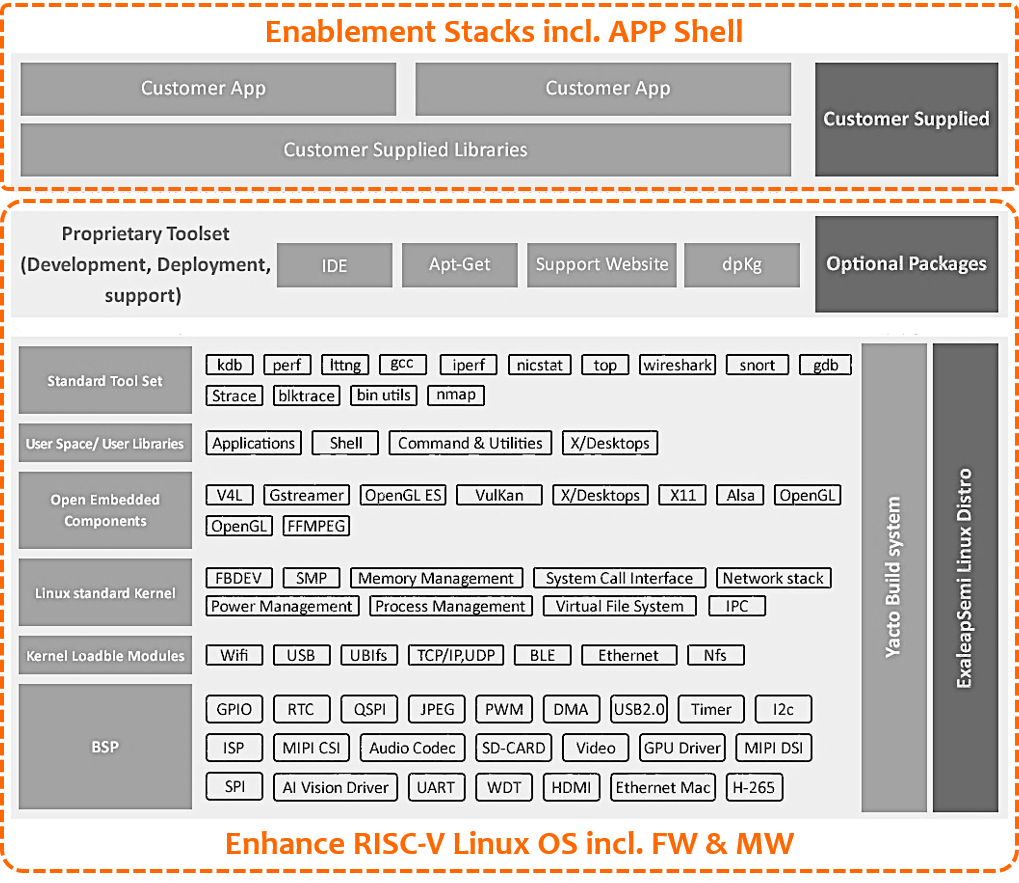 With the talent reserve, the LeapFive Technology team started to accumulate from the RISC-V related underlying and ecological technologies.  Through systematic cooperation with the industry’s top-level resources, it has opened the whole industry from chips, underlying software, equipment, applications, solutions, etc.  The chain has laid a solid foundation for the system application of RISC-V technology in important industry scenarios.

Dr. Aglaia Kong pointed out: “The most important thing for a technology company is continuous iteration, continuous innovation, never denying itself, always creating new challenges, and constantly climbing to new heights.  LeapFive has developed a variety of chips around the Industrial IoT and has been applied to different application scenarios of companies, such as Galanz and State Grid, which proves that we have done it right and can do better in the future.”

When talking about the future, Dr. Aglaia Kong said that the IoT will be the fastest growing industry for RISC-V in the future.  Many IoT technologies are now used in smart home products, and I think industry, logistics, and energy are the most important areas of IoT.  Industry has a very significant impact.  The RISC-V+ blockchain technology can provide a safe and trustworthy platform, and the IoT is the field where it can show its strengths.

In the field of CPU architecture, a pattern of X86, ARM, and RISC-V has been formed.  However, as a rising star, it is difficult for the new RISC-V instruction set to challenge the status of X86 and ARM in the short term, and the new IoT market provides a rare breakthrough point for the development of RISC-V.  Therefore, the success of RISC-V is inseparable from a good ecological environment, which requires not only the development of RISC-V technology, but also the collaborative innovation of related products, software, and hardware.  In the future, only more companies represented by LeapFive Technology will participate in its ecological construction, and the RISC-V architecture can go further.